On July 16, 2016, Troop 3 Milton came home to T.L. Storer.  The troop had not attended a summer camp there in twelve years. So at 9:00 AM on Saturday July 16th, Scoutmaster Dave Humphreys and Assistant Scoutmaster Ron Gauld along with Troop 3 parent Andy Synnott arrived at Adams Field to witness the graduation of four of their Scouts from National Youth Leadership Training (NYLT).  The NYLT contingent along with two younger siblings and two senior scouts who had had been NYLT staff formed the advanced party for the troop’s arrival the next day. So with high spirits after a successful NYLT course, the scouts moved over to Campsite Chippewa and dropped off their gear before heading off to do some required laundry and enjoy some celebratory pizza.

The calls of the ravens with the rising sun woke the early arrivals and breakfast was made and preparations for the Troops arrival were completed. Soon enough the Troop started to arrive and eager scouts started to unload footlockers and bags and unhook bicycles for the upcoming week. Senior Patrol Leader Jackson Humphreys gathered up his key leaders and got the Troop organized. Tents were assigned and the all-important bug netting was set up. The troop then gathered up and off they went on a tour of the camp finding the waterfront for swim testing, COPE and Climbing, the all-important dining hall and the trading post was located for later attack. The final stops on the tour were shooting sports, nature (yea nature!) and the chapel.  Then it was back to Chippewa to finish getting settled and get ready for the first meal of the week. The Troop’s 29 scouts, two adult leaders and two additional parents soon found themselves sitting in the dining hall enjoying a good meal and quickly found the old Troop 3 sign nailed up in the rafters and determined that a new one needed to be made.

Monday morning broke with a little light rain as the Troop raised the colors in the campsite and preparations were made for the first full day at camp.

Locations for merit badges, Trailblazers and Older Scout program were all determined and soon after breakfast off the scouts went eager to start the week off with a bang. Monday afternoon the troop’s senior scouts went up the rifle range where they learned how to load and shoot black powder rifles.  This was a Rare Adventure that they had chosen.

On Tuesday the Magee Cup relay race plan was developed and put into effect. After dinner the runners, bikers, swimmers all were in place. The race was close and the Troop was 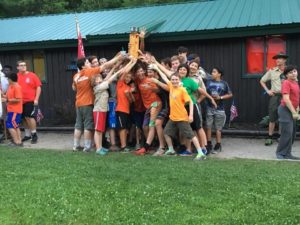 in second place until Quartermaster Andrew Viola, paddling in the kayak leg, powered across Adams pond and took the lead that was never surrendered again. Soon anchor leg runner Patrick Fox crossed the finish line and the Troop had won the Cup. The entire Troop mobbed the winning team and the cup was carried back to the campsite amid laughter and shouts of joy.
A happy group gathered around the campfire that night as each leg of the race was retold in exacting detail and after some impromptu singing and comedy the troop settled into some well-deserved rest.

Wednesday was a big day as soon after lunch the scouts in the Older Scout program left for a bike trek, the troop also had a large group heading off for the Wilderness Survival merit badge overnight. It was a much smaller group that night in the dining hall and enjoyed a meal with the usual singing and silliness that is a part of a scout camp meal.

Thursday morning came as the groups returned to main camp after surviving a night off by themselves. They came home tired but happy and after some showers, food and rest they were off again to play Camp wide games after dinner.

Friday was the lets finish up the merit badge day and get ready for the final campfire. Troop 3 scouts gathered at the fire to watch Scoutmaster Dave Humphreys get his Woodbadge beads before the fun that is a scout campfire started. Songs were sung, jokes were told and James” Jiggles” Disandro and Carl Williams represented the Troop in the program with a well done skit about a ship hitting an iceberg. Soon enough Scout Vespers was sung and the troop quietly returned to Chippewa for the final night of camp.

Saturday morning came all too soon and the troop went to the dining hall for the last breakfast of summer camp 2016. Back in the campsite trunks were packed in preparation for departing Camp TL Storer. Troop 3 had a successful camp, several scouts advanced in rank, and lots of merit badges were earned. The Troop scouts and leaders decided that it was good to be home again.  In that spirit the Troop is hoping to return to its historical roots and stay out at Campsite Sioux and run an old fashioned patrol cooking summer camp in 2017.